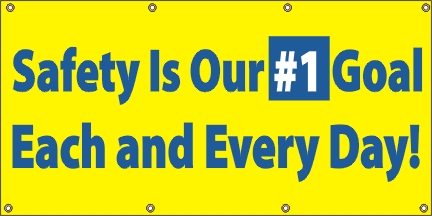 Safety is Our #1 Goal

“What is the most important thing on the range?” yelled the Navy Firearms Instructor to the group of young sailors amassed in front of him. “Safety!” was the reply that they had been taught to yell back in unison.

After the twenty minute safety briefing (four, top to bottom pages, read outloud mandatorily every morning) the students were allowed to begin the training day while holding their unloaded rifles and pistols.

Firearms training is not the only area that claims to place “Safety” above all else. I have been inside of numerous manufacturing facilities and have seen large signs posted on the walls extolling the virtues of safety.

“Safety is Our #1 Goal” read a large banner posted near the entry to the employee breakroom/lunch area.

In the firearms world, we throw around the word “safety” as if saying the word often enough will cast some kind of magic spell of protection around everyone. We create more and more specific “safety rules” and “range rules” in a never ending quest to create the perfect environment where there is zero chance that anyone could be injured while using a firearm.

I once used a shooting range where I was required to read, initial each page, and then sign the final of 26 pages of range safety rules. I’m not kidding, I counted 26 pages.

If you close your eyes you can almost see the “safety board” of your local public range. They are all sitting around a table, drinking Diet Coke and eating donuts. No one wants to be outdone by the others. Everyone of them has to add four, five, six, or more of their own rules to the mix. That is how you end up with a 26-page range rules document.

NEW!! Did you know that we now have digital training courses?
Click Here to gain instant access to Force Options: How to Defend Yourself Without a Weapon >>

Using the two previous examples about what is most important on the range and the #1 goal, I would like to point out that mindlessly throwing around the word “safety” is not only a lie, but it is dangerously deceptive as well.

The institutionalized and heavily indoctrinated career Navy men took great offense and looked at me as if I was a heretic. “You don’t know what you are talking about.” a retired Senior Chief said to me.

I continued, undaunted, and replied to him that if safety truly was the most important “thing” on the range then the students should never be issued live ammunition for their firearms. Anytime you conduct live-fire training, there is an element of danger present. Firearms, by their very nature, are dangerous tools.

“That’s stupid,” was the Chief’s retort. “How are they going to practice and qualify if they don’t use live ammo?”

“So, the most important thing on the range is to train them and then have them qualify with their guns,” I inquired of him.

The retired Senior Chief paused before answering, realizing he was being led into a logic trap. “Okay, smart ass,” he continued. “How about we say that safe firearms training is the most important thing on the range. Will that make you happy?”

He had missed my point, but he would not be the first or the last one to do so.

In the case of the manufacturing plant with the “Safety is our #1 Goal” banner, that too is a fantasy posted to simply make people feel good about themselves. You see, in that particular plant there were numerous hydraulic presses, lathes and milling machines, forklifts, and front loaders. All of these powerful machines, if operated negligently, could maim or kill a person. If Safety is the #1 Goal, why do you have all this dangerous equipment in the plant?

The number one goal of any manufacturing plant is to efficiently and effectively produce a product or several products that companies and consumers want to buy. The greater the demand for their product the better off the plant will be. The workers’ jobs will be secured and everyone shares the fruit of their labor. No customer is going to pay you for your safety record, and you cannot box up safety and ship it out to consumers.

US Marines searching for victims in Beirut eight days after attack
(cnn.com)

The Price Paid for Safety

This “Safety Uber Alles” mentality has been pervasive in the United States military for decades. In the book “Boyd: the Fighter Pilot Who Changed the Art of War”, the author Robert Coram relates incidents were Colonel John Boyd, the pre-eminent fighter pilot instructor of the time, chastised Air Force unit commanders who boasted of their “safety records”. Boyd told them that their obsession with safety would cost pilots their lives when they had to engage in real combat. These fighter pilots were not training hard and preparing for the harsh reality of life and death combat because in their commanders’ minds, safety was the priority.

On October 23, 1983, the US Marine Barracks in Beirut, Lebanon, was attacked by a terrorist truck bomb; 241 Marines and Sailors were killed and over 100 more injured. The nation was shocked and dismayed. Most Americans could not believe that something like this could happen.

What the American public could not know was that  the rules of engagement (ROE) severely restricted the use of force, not allowing Marines to carry loaded weapons, allowing them to shoot only if they could verify that their lives were in danger and only if they could clearly identify a specific target.

The gate guards and sentries in Beirut had empty weapons. Why? Because safety is our number one goal. Commanders are more afraid for PFC (Private First Class) standing at the gate having a negligent discharge than they are of the same PFC being killed by a terrorist.

The USS Cole sits off the coast of Yemen after a terrorist attack blew a hole in its side (cnn.com)

On October 12, 2000, the USS Cole, a US Navy destroyer, was attacked by a small boat loaded with explosives. The explosion killed 17 sailors and injured 39 more. Once again, we can see how the desire for a perfect safety record led to the death of these sailors. Read the following report on the Rules of Engagement (ROE):

The destroyer’s rules of engagement, as approved by the Pentagon, kept its guards from firing upon the small boat (which was not known to be loaded with explosives) as it neared them without first obtaining permission from the Cole’s captain or another officer.[37]

Petty Officer John Washak said that right after the blast, a senior chief petty officer ordered him to turn an M-60 machine gun on the Cole’s fantail away from a second small boat approaching. “With blood still on my face”, he said, he was told: “That’s the rules of engagement: no shooting unless we’re shot at.” He added, “In the military, it’s like we’re trained to hesitate now. If somebody had seen something wrong and shot, he probably would have been court-martialed”. Petty Officer Jennifer Kudrick said that if the sentries had fired on the suicide craft “we would have gotten in more trouble for shooting two foreigners than losing seventeen American sailors”.[37]

I feel certain that most, if not all, of those reading this have had the ad nauseum range rule experience. A good number of you are veterans who are all too familiar with ROE policies so restrictive as to give advantage to the enemy and practically guarantee the death of American servicemen.

When we examine the manufacturing plant example: plant personnel would tell you that the dangerous machinery is only operated by trained people and that there are very specific rules for using and handling heavy equipment. They don’t simply speak the word “Safety” over the heads of the employees and turn them loose on lathes, forklifts, and hydraulic presses.

If we in the gun culture or shooting community are truly interested in reducing the instances of negligent injury or death, is there a better way to achieve this than creating a 26-page range rule document? Would it not stand to reason that the better educated and trained shooters are, the more competent and proficient they will be when handling firearms?

Whether we are considering the manufacturing plant, the shooting range, or the Rules of Engagement, the fantasy is the same. The “Safety Uber Alles” problem stems from the idea that by simply instituting enough rules we can guarantee a zero-defect, perfect safety environment.

Safety as an ultimate goal is an impossible achievement. The only true way for complete safety to be achieved with firearms is to take away all live ammunition or close the range completely. Safety, however, can indeed be the result of educated, well-disciplined, and properly trained shooters. The only  “safe” shooter, in the absolute sense, is one who has no ammunition. However, skilled and educated shooters can operate with very little chance of negligent injury.

Rather than viewing safety as our “#1 Goal”, perhaps we could view it as the logical result of well-trained and educated people. If a person has been taught how to properly handle a firearm, not just at the shooting bench, but in the real world, would they not fulfill our “safety” requirements?

Stop viewing safety as your goal and start viewing safety as the logical result—the byproduct, if you will, of highly trained and skilled people. The better educated, better trained, and well-disciplined your people are, the less likely they are to behave in a negligent fashion.

If, after coming to the end of this article, you still believe that “Safety is the most important thing on the range”, your only honest recourse is to forbid the use of live ammunition. There. Everyone can be safe now. (Unless they trip and fall. Damn! Someone write some rules about gravity.)