“Aside from the movies and TV, dry fire instills more bad habits than any other activity.” Such was the comment of the owner of one of the nation’s top shooting schools. The school in question puts through some 5000 plus students per year, so they have a tremendous amount of experience on which to base their opinions.

The terms Dry Fire or Dry Practice have been used for decades and both descriptors have the same meaning for our purpose here. In the simplest terms, dry fire means to practice with a firearm sans ammunition.

During USMC basic training at Parris Island, South Carolina we spent an entire week dry-firing with our M16A2 rifles. We called this “Grass Week”, as we’d be spending a lot of time sitting, kneeling, and lying in the grass. Our instructors combined verbal teaching methods with hours upon hours of dedicated dry-fire drills. We were assured that if we dedicated ourselves to the dry-fire process that we would be rewarded on Qualification Day with high scores.

From a personal standpoint, I absolutely took the dry-fire training seriously. In my mind, there was no other choice. As my Primary Marksmanship Instructor had advised, on qualification day my dedicated dry fire work was rewarded with an “Expert” rating, the highest rank awarded to Marines.

Dry Fire is for Pros

As a United States Marine then Military Contractor, I have had the opportunity to work alongside numerous professional operators; be they MarSoc (Marine Special Operations Command), Army Special Forces, Navy Seals, or Air Force Combat Controllers.

What all of the aforementioned armed professionals have in common is not the amount of live fire that they do, it’s the amount of dry fire. Many years ago a friend offered a simple explanation. “The difference between an amateur and a pro is how much dry-fire they do.”

Far too many shooters have the misconception that dry fire is something that beginners do until they prove that they can handle a firearm safely with live ammunition. These folks believe that dry fire is for beginners and once you have some practical experience you can forget about it and just live-fire. 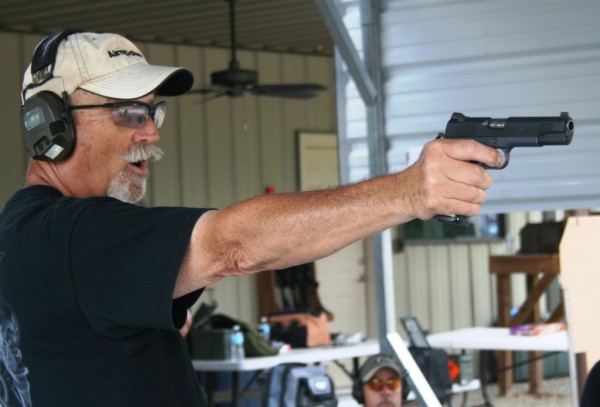 For those people I would offer the following; Max Michel and Todd Jarrett have been two of the top competitive shooters in the world. During separate interviews, I asked them both about their thoughts on dry fire practice. Each man related that when they made the decision to become a professional shooter, to do it for a career and use that money to feed their families, they started a dedicate regime of dry practice.

If there is a down side to dry fire or dry-practice, it is a misconception or misunderstanding by the individual shooter that somehow holding a pistol and snapping the trigger is ‘practice’. Without some kind of professional training or guidance, self-initiated dry fire can indeed lead to terrible gun handling and ingrained bad habits.

Ingraining bad habits through poorly applied dry practice is the prime reason that many instructors will shy away from it or not recommended it.

There is also a movement afoot to convince new and untrained gun owners that instead of taking training, they should instead invest in dry fire practice kits. There have been a variety of kits based around laser systems for many years. These kits do have their place in practice but not at the expense of professionally guided training.

When considered fairly and with an open mind, it is not the technique of dry fire that these trainers find fault with in the equation, it is the erroneous application of said technique. It is the person who deludes themselves into believing that they can become an expert shooter by self-taught dry practice that errs. Also, you have gadget companies producing marketing material to encourage gun owners to “stop wasting money on expensive ammunition and range fees”. Their solution is to purchase the dry fire kit their company sells.

Before you begin a regime of dry practice you should absolutely attend some kind of professional shooting course that reinforces marksmanship principles and firearm handling. You should be shown how to properly dry practice by an instructor who can observe you and ensure you are doing it correctly.

*Safety Note: Before using any live/genuine firearm for non-firing training or practice you must absolutely remove all live ammunition from the practice area and the gun must be twice checked to verify it is not loaded. Twice checking could be two individuals inspecting the gun or one individual both visually and physically verifying that they gun is indeed unloaded.

Dry practice, if done in a dedicated manner after receiving proper training, is an excellent way to keep you basic firearms manipulation skills sharp. Even professional shooters cannot go to the range every day or sometimes every week, but you can and should dry fire on a regular basis.