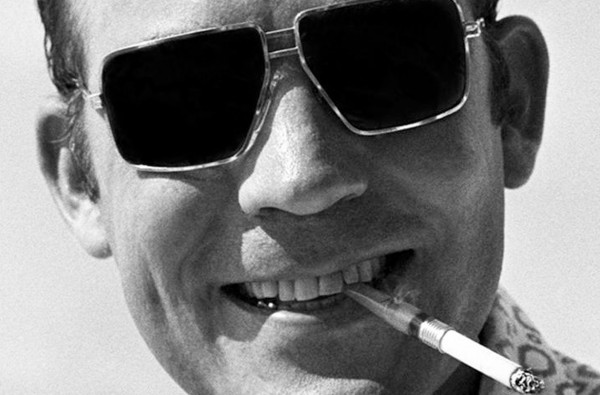 Who the hell is Hunter S. Thompson?

The evening air in Aspen, Colorado was pleasant, the temperature was perhaps 72 degrees as the sun began its slow descent below the western edge of Rocky Mountains. During the summer months, the residents of one of the world’s more popular ski towns kept themselves busy with festivals and concerts. This evening’s event would be a concert by Lyle Lovett and his Large Band.

In addition to promoting a new album, Lovett had recently married Julia Roberts. Roberts, hot off of the movies “Pretty Woman” and “Sleeping with the Enemy” was a much sought after celebrity by both paparazzi and fanatics. In addition to routine security concerns, the concert promoter in Aspen was concerned with photographers and curious fans sneaking around the backstage and the tour bus area in hopes of snapping a shot of Ms. Roberts.

For my part I had just recently signed on to work with a professional security company whose offices were in Basalt, Co. (just a few miles down the valley from Aspen) The Lovett concert promoters had contracted us to provide backstage / VIP access security for the event.  It was a simple one night protection contract.  I would be supervising four other men. The atmosphere was casual. We wore polo shirts and khaki pants. Having been a team leader in the USMC, I knew how to supervise and organize men, but this was a genuine executive protection job and I was excited to be a part of it.

Arriving early, I met with the promoter and he explained his concerns and laid out some basic instructions. The venue staff would handle all of the front of the house access, crowd control, etc. We would be charged with simply keeping trespassers away from the tour bus and trailers as well and restricting access to the backstage and VIP areas.

I was handed two copies of the “The List.”  The List contained the names of those who were permitted access to the VIP area behind the stage as well as the tour bus and trailers. The band and road crew naturally had the designated neck-hangers (back stage passes) but there were several VIP’s who had been invited that would not have badges. “If they have a badge or they are on the list, they get in, otherwise no one else gets backstage or near the bus.” Those were the simple but explicit orders for the evening’s event.

A quick review of the list and one name jumped off of the paper at me; John Denver. I grew up in the 1970’s and ’80’s. I had listened to John Denver’s music and seen him in movies and on TV. Denver moved to Colorado in his late twenties and had adopted Aspen as his new home. The people of snow town revered him and he had become the leading spokesman for the city and the unofficial King of Aspen.

It did not take long to post the security agents where they needed to be stationed. There was one primary entrance for the backstage/VIP area and one of my men would be stationed there with a copy of the list. Others were posted in strategic positions with one man constantly around the band’s tour bus and trailers. Every agent had a portable radio and I would be roving and relieving them for bathroom breaks, etc.

Perhaps thirty minutes into the job the agent at the bus had to shoo away a couple of autograph seekers who found their way to the back lot. They asked him if Julia Roberts was on the bus. “No, and this area is restricted, please move along.”  She wasn’t by the way, Lovett’s young bride was a thousand miles away on a movie set somewhere.

VIP’s and special guests began to arrive at the backstage area and were verified with the list. John Denver, sporting a beard and not at all looking like the man I knew from TV, arrived and was escorted to the front row for the show. It is worth noting that Denver had not been on stage for a number of years.

While on patrol I made my way into the venue. I was not at all familiar with Lyle Lovett’s music, but it sounded good and the band was putting on an excellent performance.  In the middle of the show Lovett acknowledged John Denver and asked him if he would like to come up and ‘do a number’ with the band. When Denver accepted and walked up on stage the arena went wild with applause. This was more than the ticket holders could have anticipated.

I was walking from one post to another in the back lot area when I got the call over the radio. It was my guy at the VIP entrance. “Can you come over here? We might have an issue.” I acknowledged that I’d would be there directly.

As I walked up to the agent holding the list I could see there was an obviously agitated man standing off to the side. The gentleman in question was a tall, caucasian man who seemed to be in his fifties. He was wearing tinted glasses and what looked like a safari-type hat with the sides rolled up. Accompanying the gentleman was a very attractive and well-endowed female companion.

New Apparel is In! Check it out:
Click Here to Check Out New Official SOTG Apparel >>

I pulled my man over for a quick sidebar out of earshot of the rest. “What’s the problem?” I asked. “He wants to get in, but he’s not on the list.” my guy stated and continued “He say’s his name is Hunter S. Thompson.” “Who the hell is Hunter S. Thompson?” I parroted back to him. My compatriot shrugged his shoulders, he was about the same age as I and had been unimpressed as well. The tall man had been very insistent that he was indeed invited to the show and also extremely indignant that he had not been passed through.

I told my guy to stay where he was. To the tall man I stated, “Sir, I’ll be right back.”  Ducking inside I hoped that I would find my client, the concert promoter, he would have the final say as to who came and went. Fortunately, it took only a few moments to locate him.  I explained that there was an issue and said “The guy says his name is Hunter S. Thompson, does that mean anything to you?”  To my relief, rather than being annoyed, the promoter exploded in laughter. “Yes, yes, we know who he is. Please let him in.”

Within the next few minutes, Hunter S. Thompson and his companion were ushered backstage to the VIP area. His indigence seemed to fade and he smiled broadly as the promoter approached and shook his hand enthusiastically. I made a mental note that I would need to inquire about this Hunter S. Thompson person and find out just why he was a VIP.

During my time in working in and around Aspen, I was introduced to John Denver. He shook my hand and was very pleasant. I knew nothing of his politics or world views only his music and movies. To me he seemed a bit sad. It filled my heart with sorrow years later when I heard of his tragic and untimely death.

As for Hunter S. Thompson, I did my research. The famous writer and founder of “gonzo journalism” had also discovered Aspen and adopted it as his home town. Upon hearing of his death I was less shocked and saddened than I had been when John Denver passed.

Author’s Note: The previous event occurred in the summer of 1993 when I was at the very beginning of my Executive Protection career. My endeavor into professional writing had not yet begun. Over the years, my brushes with celebrity would be rare, as my client list consisted predominantly of true executives and their families in need of protection.