Hey guys, we are in the official Special Operations Equipment Shop, yes there is an official SOE shop and I am sitting with John Willis, the HMFIC of SOE. Is that enough TLAs or FLAs for you. John is going to tell us the origins of the Combat Cock. 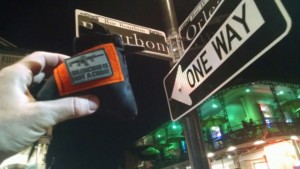 The Combat Cock originally was a pin cushion from better homes and gardens. That is where the pattern came from. It was not ninja’d out or anything. It was a different size. So, we had a kid working for us, moved from California, and was just not acclimating well to Camden. He was getting ready to go home for Christmas, I flew him home to see his mom in California.

He tried to get a domo doll out of the claw machine at Walmart. He was going to take it and go around like the Tap, Rack, Bang guys do with the GI Joe dolls. So, he was going to take this little domo doll around and take pictures in California. He couldn’t get it, after like ten dollars, I am ready to go do something else and he is not getting this damn thing out of the machine.

We build a Facebook Page and a completely different website for them. It was very plain at first, it was just a small little comb, Cordura beak, and over time we have evolved it into something more detailed. 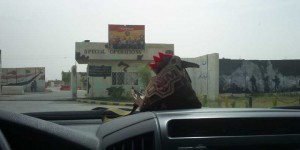 They are kind of a morale booster, we will send them out to deployed units overseas, APO orders. We will send out a box of 15-20 of them and we will write all over them, “box of cocks” or “box of big, black cocks” so imagine what the postal workers are thinking. When it shows up on post or on base, they don’t know whether to open the box or what’s in the box. That is how it started off.

We have been doing it for about five years and it has turned into something a bit more fancy. We do limited edition cocks where we will run specials. We did Captain Americock for the 4th of July.

We send them over and it has become huge. These guys send these things back, photos of them in aircraft, on blown up equipment or blown up armor. Pictures we can’t even get away with posting on Facebook. We get them back from drug seizures, passed out hookers, transients, the craziest things you can imagine these things being, we get photos of it.

We have an Original Combat Cock Facebook Page and we also have the SOE Facebook Page. Guys just send pictures of these things so we have about 50-60 versions of them on the website, you can order colors of them, dress them with morale patches, etc.

We have limited edition ones like these which are only available during certain sales. When we run sales we will run a special cock for the sale and the only way to get it is to purchase them during the sale. We have guys all over the world, literally collecting these things. We had no idea it was going to turn into this.

We have shirts, patches, beanies, coffee cups, etc. with a cock on them.

Just from one dude trying to get a domo doll out of the claw maching. There is no claw machine anywhere filled with cocks is there?

There’s not but we actually went into build-a-bear and got the number for the company that makes machines just to stuff stuffed animals. That is what we are moving over to. We are getting a $10,000 machine that blows fiber into these things because right now, we have two guys down there filling these damn things and stuffing them full of fiber filling.

We literally cannot build enough of them. All our new girls when they come in, we have them sew chickens because it is a piece of gear that is not life support or an essential piece of mission gear. We teach our people how to sew by sewing these cocks.

I’ve been doing this for over 25 years. We were joking about it a couple years ago that we had been in business longer than the internet. When we started doing the math, we really have been in business longer than the internet. We were doing this back when you used to have to pick up a phone and we had a line drawing catalog, then a color copier, thermal fax machine.

Nowadays, every now and then, once a week or so, someone will ask for a catalog. We kind of laugh about it, who has a catalog nowadays?

Yeah, we have a warehouse full of them because you are the ONLY one who has asked for one this month.

It is crazy what you hear nowadays. We have full page ads in Recoil Magazine, if you need a catalog you probably aren’t going to be a customer.

We build stuff for the warfighter. We have been doing this so long, if we are building something, somebody out there in the world killing bad guys is using it. By the time you as a consumer can buy it, we have a product that is well tested.

We just have fun thus the combat cock and the tacti-cool type stuff, the visors, keychains… 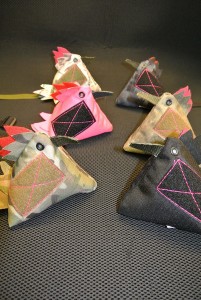 Right, because we deal with the dudes that they are making movies about and those guys when they are switched on, they’re on and everything is business. People take me the wrong way, I speak factually and with a lot of brevity. You’ll send me an email with four paragraphs of text but really you only had two important lines in there. I will answer you as fast as possible because we are trying to answer everybody.

That is the deal…we come to work and what you see on our videos, we don’t edit our YouTube Videos. What you see happens, happens. If we say something that shouldn’t be in there, you’re going to hear it. You get to hear all of it. You get to see who we really are. We are a close knit family here.

I have 33 employess and we pay them an hour every day to go to the gym. We pay their gym fees and we pay them while they’re working out. I cook breakfast for all of my employees every morning. They walk in here and we feed them breakfast. After we get back from the gym, we cook them lunch. Not fast food cheeseburgers, we cook steak and chicken every single day. The new shop has a commercial kitchen in it.

They’re are live cocks on this property!

This was kind of a test bed, we have a little mini farm up there. Goats, chickens, geese, etc. We will see, we might fall short but we will be ahead of where we were yesterday.

John, for this video, thanks for taking the time to let me sit on the official casting couch and talk to you about your combat cocks.

Thank you for joining us for this edition of Student of the Gun Homeroom. Make sure you’re listening to the radio show every week, watching the TV show, and download the mobile app. Hey, it’s free right. You can get it on the Google Play Store or the iTunes Store. Please, leave your comments below!